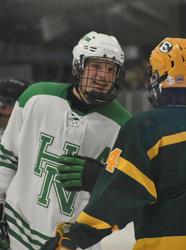 Henry helped the Green Wave to a third place finish—their best showing ever—at the Padua Holiday Hockey Tournament, producing nine points (3-6-9) with a +7 rating in four games against top-notch competition from all around the state of Ohio.

“Milo is a workhorse for us,” said Holy Name head coach Craig Patton.  “He had a great tournament.  He has a knack for making a play when we need one.”

Henry, who scored a hat trick in Holy Name’s tournament-opening 4-3 win over St. Francis, is coming off a junior season in which he scored 23 goals.

“Milo is a big voice on our bench and his leadership goes much farther with this team than just wearing a letter on his jersey,” Patton said.  “Nine points in a tournament like that with the great teams we played against shows how talented he is.”